What is "Twinning" and "Mundialization?"

The purpose of Twinning is to promote co-operation at the civic, institutional, organizational, and individual citizen level, between the two Towns, with no intolerance or discrimination, and consequently to the benefit of both communities. Twinning of communities in different countries is approved and encouraged by the United Nations and Unesco. From Twinning, the natural progression is to Mundialization. This movement was started in Hiroshima, Japan, in 1945 when the survivors of the devastation caused by the world’s first atomic bomb signified their resolve to work for a world order which would make forever impossible, a repetition of the tragedy from which they had just escaped. 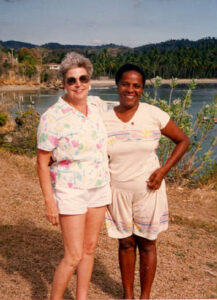 Mundialization fulfills the principles of ‘The Charter of the United Nations’ and implements the meaning of  ‘The Universal Declaration of Human Rights’. It means acceptance of our role as a Community of the World, symbolized by the United Nations, since we recognize that our security and welfare is linked with the security and welfare of all the cities, towns and villages of the world, threatened with the destruction by total war. In no way does this diminish or threaten our attachment and responsibility to our Country and Hometown. Rather, we become more aware of our responsibility as Citizens and accept the urgency of helping others.

Mundialization, in short, means that we, as a community, accept and work to carry out, the principles of the Chart

er of the United Nations; that we affirm our belief in the Universal Declaration of Human Rights and attempt to understand and implement its meaning in our community and throughout the world. 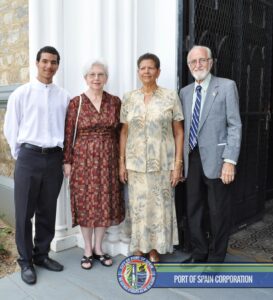 The idea for co-operation and involvement between the two cities was initiated by Mr. Phil Atteck, Radio Manager of Radio Guardian (at that time), in Port-of-Spain. The coincidence which sparks off sub-sequent events is that both Radio Guardian and CKTB in St. Catharines have the same radio wave length of 610. The City Councils of the two cities passed civic resolutions in favour of Twinning and Mundialization. The climax to these resolutions was at Port-of-Spain on Friday, August 30, 1968, and St. Catharines on October 4, 1968 at St. Catharines City Hall.

Since then, Executive Officers and Standing Committees have been formed on both sides, in the form of normal organizational structure, to conduct the business of Twinning. 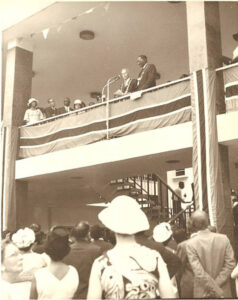 September of 1969, the First Charter Flight of approximately 140 people arrived in St. Catharines for the furtherance of Twinning. With them arrived a Steel Band, which took part in our Grape & Wine Festival with such success, that this has been repeated for the past four years. The enthusiasm generated by the visit of the Trinidadians and the Steel Band, prompted a return flight to Port-of–Spain in 1970 to enjoy their Carnival. Our return trips to Trinidad are accompanied by hospital and school supplies, financial assistance, and our Grape King and Grape Queen representing our own Niagara Grape and Wine Festival.

Although we are a non-profit organization, we have a social aspect in that we hold dances providing West Indian music. From these functions we derive a source of revenue which enables us to finance our organizational ventures in St. Catharines and Port-of-Spain.

The organization of Twinning is not alone in this venture. We have the support of the City Councils of both Port-of-Spain and St. Catharines as well as Service Clubs, Churches, Schools, Boy Scouts, etc. which have twinned with counterparts in Trinidad. We also receive assistance and participation from Social Clubs and various Ethnic Groups to further our endeavours.

It is with this brief summation of Twinning and Mundialization, that the St. Catharines Twinning Association hopes to enlighten you on the ideals and aims of Twinning.

The images are presented within a shield to signify the protection of the city. Safety is a great concern for any city, therefore the shield portrays the City’s concern for the safety of its burgesses. 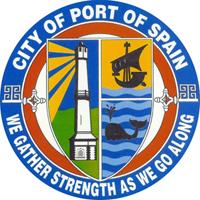 The motto “We Gather Strength As We Go Along” was previously presented in Latin. However the motto will have more weight if it is understood by a wider cross section of the population. For this reason the motto has been translated into English.

The images of the keys on either side of the crest stand for the highest honour bestowed upon a person by the city. The keys may also say “Welcome, we open our doors to you”.

The lighthouse standing for so long above the City of Port of Spain is also a welcoming symbol. It conveys safety and guidance, and is the ideal image for the crest since it is so well known by residents of, and visitors to the City.

The ship signifies the City’s beginning as a port, the reason for the name Port of Spain. The style of the ship represents the Spanish ships that frequented Port of Spain from the 15th century. The ship is a token of prosperity and good trade.

The whale is presented to illustrate the City’s history as a whaling ?. this little known fact should be highlighted to preserve our heritage.

The colours used in the crest are red, white, black, blue, green and yellow. These hues not only include out national colours, but those that represent the Earth, sea and sunshine as well. The strong use of colour also symbolizes the vibrancy of the City of Port of Spain, and the various shades of the City’s residents.

The crest pays tribute to the City of Port of Spain, past and present. It uses colours and images that remind us of who we are as people and what out City means to us 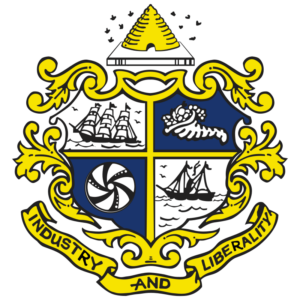 No record is readily available that provides a description of the present coat of arms; however, it is generally accepted that beehive alludes to industry and productivity. The Motto on the scroll includes Industry, referring to all forms of economic activity and productive occupations. Liberality refers to being free and generous and without prejudice.

The Sailing Ship alludes to navigation. The forerunner to the first Welland Canal was the watercourse of the Twelve Mile Creek which enabled sailing ships to travel and be pulled by horses up the watercourse to the heart of our City. Subsequently, this early navigational course was developed into a canal and preceded three ship canals that followed a path through our City until the present day fourth ship canal.

The Cornucopia, commonly referred to as a Horn of Plenty, pertains to the rich agriculture and fruitlands abundant in the area.

The Millstone, (sometimes, and incorrectly, referred to as a grindstone) is symbolic of the grist mills and flour mills prevalent of an earlier era. These mills were built along the Twelve Mile Creek that provided an inexpensive and plentiful supply of water used to operate them.

The Steamship with Sails, relates to the ship building in the area by Mr. Lewis Shikluna, a builder of many fine sailing vessels and credited with helping to build a steamship that sailed the Atlantic Ocean to England. The early shipyards were located near the foot of Burgoyne Bridge; however, ship building has always been a thriving industry in the area, with shipyards at the former Port Dalhousie, on the Twelve Mile Creek, and the new modern facilities at the Port Weller Dry Docks.

When the coat of arms is used on stationery, it is a solid color of light blue on a white background. However, no authentic document is readily available that states what colors, if any, are to be used.

The earliest known record of the origin of the City of St. Catharines coat of arms is from a by-law dated November, 1851, with the coat of arms affixed thereto. It would be reasonable to assume that the coat of arms came into being about this time.

In 1976, the coat of arms was officially registered with the Government of Canada, along with the city flower and city logo.

The Flag of St. Catharines

The flag features the city Coat of Arms on a white field, surrounded by green bars. The green color symbolizes the fruitlands and extensive gardens of the city.

The Logo of St. Catharines

In 1972, St. Catharines City Council adopted the design of The Chevron as its official logo. The chevron design represents past and present characteristics of the city – the four blue lines symbolically represents the four Welland Canals and the green characterizes the valuable fruitlands. The green is especially significant since St. Catharines has long been known as The Garden City

St. Catharines Mayors who have visited Port of Spain